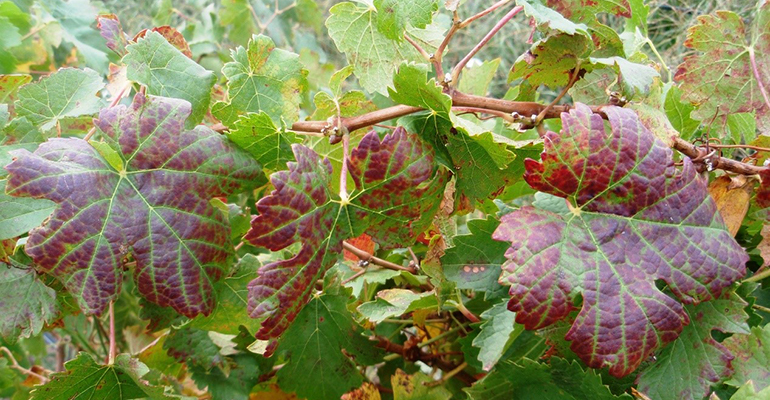 WHAT ARE PLANT DISEASES?

The vine has been one of the most characteristic crops of European civilization for millennia. Domesticated
in what is now the area near the Black Sea of ​​Georgia around 10,000 years ago it was brought by
civilizations all over the world. Exemplary is the case of the Roman people who, during the conquests,
planted the vines in order not to miss the legions wine in battle. This crop has also had to defend itself, in
more recent times, from pathogens from non-European regions that threatened its survival, above all the
attack of Phylloxera.

To date many of the diseases that affect the vine are prevented or treated by special plant protection
products, but for some there is still no cure. Among the most important cases for the production reductions
that these pathogens impose on cultivation we find Flavescence Dorèe and the Esca disease. The first is a
phytoplasm, which is a pathogen that lives within the vascular system of plants. It is transmitted by an insect
called Scaphoideus titanus and, once the plant contracts the disease, it is destined to die in a few years. To
date no curative products are available and the only method to combat the pathogen is fighting against the
insect vector and, once the sick plants are found, their removal and combustion. Despite these precautions
and the numerous checks carried out at state level by the various members of the EU, the disease is
spreading. As for the Esca disease, instead, it is a complex interaction of innumerable fungal organisms
(about 200 are known but it is believed that they are only a part of those actually present) that deteriorate the
wood and, through the release of toxins in the vascular system of the plants, they cause a characteristic
response in the leaves of the plant, the distinctive stripes. As in the previous case, plants tend to deteriorate
in the long run and there are no curative products. However, some campaigns are being carried out by
companies and research institutes that aim to remove the diseased portions of the trunk to sanitize the plant.
The first results appear to be promising.

Prevention plays a role of primary importance but, once the plant shows symptoms, it is crucial to identify
diseased vines in order to be able to intervene promptly.
Starting from this background, T# has collected data during the 2018 growing season in Italy in order to be
able to program algorithms capable of identifying diseased plants. The acquisition phase took place at the
time when these two diseases showed the most of their symptoms.

Operationally the diseased plants were marked in some portions of the vineyard so that the markers were clearly visible from the aerial photos.
Subsequently, high-resolution multispectral images were acquired with a DJI Inspire 2 drone. Once the
orthomosaics originated, various approaches for diseased plants recognition were tested. Multiple solutions
were attempted, but none appeared to be quite reliable on its own, so an approach that considered several
factors was used. An algorithm was then developed that was able to evaluate and weigh the outputs of the
individual indices to return an accurate result in the identification of diseases. The algorithm was tested on a
series of aerial images of sick vineyards to test the adaptability and reliability of the survey under different
conditions. The results were immediately very promising although still to be refined: the accuracy settled at
around 87% with most errors concentrated on the side of false positives, i.e. sick plants are almost all
reported and some included appears healthy. During the growing season 2019 further tests will be carried
out in Italy and Europe to fully test the algorithm and to validate it thanks to ground truthing.